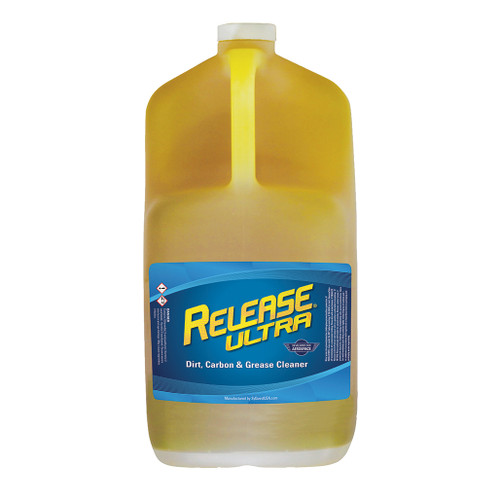 1-gallon of Release Ultra will allow you to refill 84 32oz bottles of Release.

You do the math to calculate cost per spray bottle!   Take either bottle's cost devide by the appropriate amount you can refill and get your cost per refill.

Release is designed to be absorbed quickly by the organic soil and make it easy to release from the surface you are trying to clean.

Many of the products being used in the aviation industry were not intended to be used on the surfaces they are cleaning.  Some contain solvents that will craze plastic and harm the paint finish.  Others will attack the aluminum that the aircraft is substantially made from.

The good thing is Release has been used on all parts of an aircraft both exterior as well as interior without issues.  In fact Dasault recommends Release for cleaning their reversers as they had issues with other products causing corrosion and early replacement of these expensive components.

Whether you’re cleaning soiled leather seats, Stained carpeting, the carbon from an APU port or the grime found in a wheel well you can count on Release getting the job done when other products fail.